In this post, I’ll show you the results of benchmarking the TensorFlow Lite for microcontrollers (tflite-micro) API not on various MCUs this time, but on various Linux SBCs (Single-Board Computers). For this purpose I’ve used a code which I’ve originally written to test and compare the tflite-micro API which is written in C++ and the tflite python API. This is the repo:

Then, I thought why not test the tflite-micro API on various SBCs that I have around.

For those who don’t know what an SBC is, then it’s just a small computer with an application CPU like the Raspberry Pi (RPi). Probably everyone knows RPi but there are more than a 100 SBCs in the market in all forms and sizes (e.g. RPi has currently released 13 different models).

Although I have plenty of those boards around, I didn’t used all of them. That would be very time consuming. I’ve selected quite a few though. Before I list the devices and their specs, here is a photo of the testing bench. A couple of SBCs have missed the photo-shooting and joined the party later. 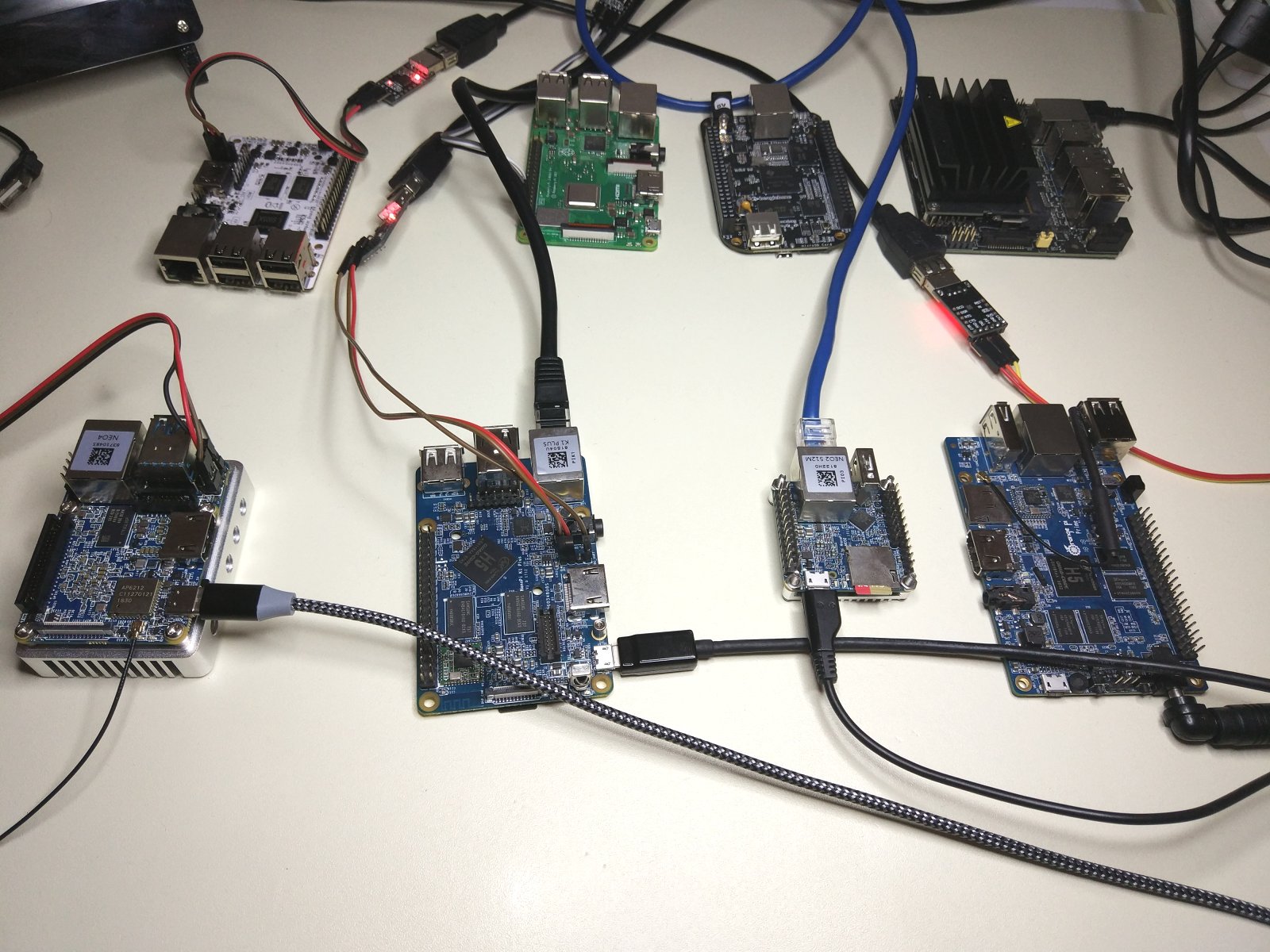 Top row, from left to right:

Bottom row, from left to right:

Missing from the photo:

I’ve tried to use the same distribution packages for each SBC, so in the majority of the boards the rootfs and packages are from Ubuntu 18.04, but the kernels are different versions. It’s impossible to have the exact same kernel version as not every SoC has a mainline support. Also, even if the SoC has a mainline support, like H5 and RK3399, the SBC itself probably doesn’t. Therefore, each board needs a device-tree and several patches for a specific kernel version to be able to boot properly. There are build systems like Armbian, which make things easier, but it supports only a fragment of the available SBCs. The SoC and SBC support in the mainline kernel is an important issue for a long time now, but let’s continue.

In this table I’ve listed the image I’ve used for each board. These are the boards that I’ve benchmarked myself

Got another result from RemoteC in the comments

That’s a good question. Why use the tflite-micro API on a Linux SBC? The tflite-micro is meant to be used with small microcontrollers and there is the tflite C++ API for Linux, which is more powerful and complete. Let’s see what are the pros and cons of the C++ tflite API.

I’ve tried to build the API in a couple of SBCs and that failed for several different reasons. For now only RPi seems to be supported, but again it’s quite difficult to re-use the library, it seems like you need to develop your application inside the tensorflow repo and it’s difficult to extract the headers. Maybe there is somewhere a documentation on how to do this, but I couldn’t find it. I’ve also seen other people having the same issue (see here), but none of the suggestions worked for me (except in my x86_64 workstation). At some point I was tired to keep trying, so I quit. Also the build was taking hours just to see it fail.

Then I though, why not use the tflite-micro API which worked fine on the STM32F7 before and since it’s a simple library that builds on MCUs and the only dependency is flatbuffers, then it should build everywhere else (including Linux for those SBCs). So I’ve tried this and it worked just fine. Then I though to run some benchmarks on various SBCs I have around to see how it performs and if it’s something usable.

Before I present the results, let’s have a quick look at the tflite model. The model is the same I’ve used in the tests I’ve done in the ML for embedded series here, here and here. The complexity (MACC) of this model is measured in multiply-and-accumulate (MAC) operations, which is the fundamental operation in ML.

For the specific mnist model I’ve used, the MACC is 2,852,598. That means that to get the output from any random input the CPU executes 2.8 million MAC operations. That’s I guess a medium size model for a NN, but definitely not a small one.

Because now we’re using the tflite-micro API, the model is not a file which is loaded from the file system, but it’s embedded in the executable binary, as the flatbuffer model is just a byte array in a header file.

If you want to test on any other SBC, you just need g++ and cmake. If your distro supports apt, then run this:

Then you just need to clone the repo, build the benchmark and run it. Just be aware that the output filename is changing depending on the CPU architecture. So for an aarch64 CPU run those commands:

And you’ll get the results.

(For a cortex-a7, the executable name will be mnist-tflite-micro-armv7l)

Note: I haven’t done any custom optimization for any of the SBCs or the compiler flags for each architecture. The compiler is let to automatically detect the best options depending the system. Also, I’m running the stock images, without even change the performance governor, which is set ondemand for all the SBCs. Finally, I haven’t applied any overclocking for any of the SBCs, therefore the CPU frequencies are whatever those images have set for the ondemand governor.

Ok, so now let’s see the results I got on those SBCs. I’ve created a table with the average time of 1000 inferences for each test. In this list I’ve also added the results from my workstation and also in the end the results of the exact same code with the exact same tflite model running on the STM32F746, which is an MCU and baremetal firmware.

The next table has results that Shaw Tan, RemoteC and Huynh posted in the comments section:

There are many interesting results on this table.

First, the RK3399 cpu (nanopi-neo4) outperforms the Jetson nano and it’s only 2.6 times slower that my Ryzen 2700X cpu. Amazing, right? This boards costs only $50. Excellent performance on this specific test.

Then the Jetson nano needs 9.34 ms. Be aware that this is a single CPU thread time! If you remember, here) the tflite python API scored 0.98 ms in MAXN mode and 2.42 in 5W mode. The tflite python API supported the GPU though and used CUDA acceleration. So, for this board, when using the GPU and the tflite you get 9.5x (MAXN mode) and 3.8x (5W mode) better performance. Nevertheless, 9.34 ms doesn’t sound that bad compared to the 5W mode.

Beaglebone black is the worst performer. It’s even slower than the STM32F7, which is quite expected as BBB is a single core running @ 1GHz and the code is running on top of Linux. So the OS has a huge impact in performance, compared to baremetal. This raises an interesting question…

What would happened if the tflite-micro was running baremetal on those application CPUs? Without OS? Interesting question, maybe I get to it at another post some time in the future.

Then, the rest SBCs lie somewhere in the middle.

Finally, it worth noting that the nanopi neo is an SBC that costs only $9.99! That’s an amazing price/performance ratio for running the tflite-micro API. This board amazed me with those results (given its price). Also it’s supposed to be an LTS board, which means that it will be in stock for some time, though it’s not clear for how long.

Additional benchmarks on the nanopi-neo4 (RK3399)

Since the nanopi-neo4 performed better than the other SBCs, I’ve build an image using Yocto. Since I’m the owner and maintainer of this layer, I need to say that this is actually a mix of the armbian u-boot and kernel versions and patches and also I’ve used some parts from meta-sunxi, but I’ve done more integrations to like supporting the GPU and some other things.

Initially, I’ve tried the armbian build because it’s easy for everyone to reproduce, but then I though to test also my Yocto layer. Therefore I’ve used this repo here:

There are details how to use the layer and build in the README file of this repo, but this is the command I’ve used to build the image I’ve tested (after setting up the repo as described in the readme).

Then in the build/conf/local.conf file I’ve added this line in the end of the file

And finally I’ve build with this command:

Then I’ve flashed the image on an SD card:

This distro gave me a bit better results. I’ve also tried to benchmark each core separately by running the script like this:

Two test all cores you need to replace in the above script the 0 with the number of cores from 0 to 5. Cores [0-3] are the Cortex-A53 and [4-5] are the Cortex-A72, which are faster. Without using taskset the OS will always run the script on the A72. These are the results:

Therefore, compare to the armbian distro there’s a slight better performance of 0.61 ms, but this might be on the different kernel version, I don’t know, but it the difference seems to be constant on every inference run I’ve tested.

From the above results I’ve come to some conclusions, which I’ll list in a pros/cons list of using the tflite-micro API on a SBC running a Linux OS.

From the above points (I may missed few, so I’ll update if somethings comes to my mind), it’s clear that the performance using the tflite-micro API on a multi-core CPU and in Linux, will be worse compared to the tflite API. I only have numbers to do a comparison between tflite and tflite-micro for my Ryzen 2700x and the Jetson nano, but not for the other boards. See the table:

The above table shows that the tflite API is 10.63x faster than tflite-micro on the 2700x and 9.46x and 3.86x faster on the Jetson nano (depending the mode). This a great difference, of course.

What I would keep from this benchmark is that the tflite-micro is easy to build and use on any architecture, but there’s a performance impact. This impact is much larger if the SoC is multi-core, has a GPU or any other accelerator which can’t be used from the tflite API.

It’s up to you to decide, if the performance of the tflite-micro is enough for your model (depending the MACC). If it is, then you can just use tflite-micro instead. Of course, don’t expect to run inferences on real-time video but for real-time audio it should be probably enough.

Anyway, with tflite-micro it’s very easy to test and evaluate for your model on your SBC.

Tensorflow 2.1.0 for microcontrollers benchmarks on STM32F746

Intro Over 8 months ago I’ve started writing the Machine Learning for Embedded post series, which starts here. The 3rd post in this series (here) was about using the tensorflow lite for microcontr...

Controlling a 3D object in Unity3D with teensy and MPU-6050