Note: I’ve wrote a complementary post on how to do some networking optimizations here.

This week I’ve received the new NanoPi R4S from FriendlyElec for evaluation purposes.

My original plan was to create a Yocto BSP layer for the board as I’ve also did with the NanoPi R2S in a recent post here. The way I usually create a Yocto BSP layers for those SBCs is that I use parts of the Armbian build tool and integrate them in bitbake recipes and then add them in a layer. The problem this time is that Armbian hasn’t released yet support for this board, therefore I thought it’s a good chance to benchmark the board itself.

Let’s first see the specs of the board.

The board is based on the Rockchip RK3399 and the specs of the specific board I’ve received are:

What makes the board special is of course the dual GbE. One interface is integrated in the SoC and the other is a PCIe GbE which is connected on the SoC’s PCIe bus.

As you can guess this board is meant to be used in custom router configurations and that’s the reason that there’s already a custom OpenWRT image for it, which is named FriendlyWRT. Therefore, in my tests I’ve used this image and actually I’ve used the image that it came in the SD card with the board. More details about the versions later.

Also the board I’ve received came with an aluminum case, which has a dual purpose, for housing -of course- and it’s also used to cool down the CPU. This is the SBC I’ve received. 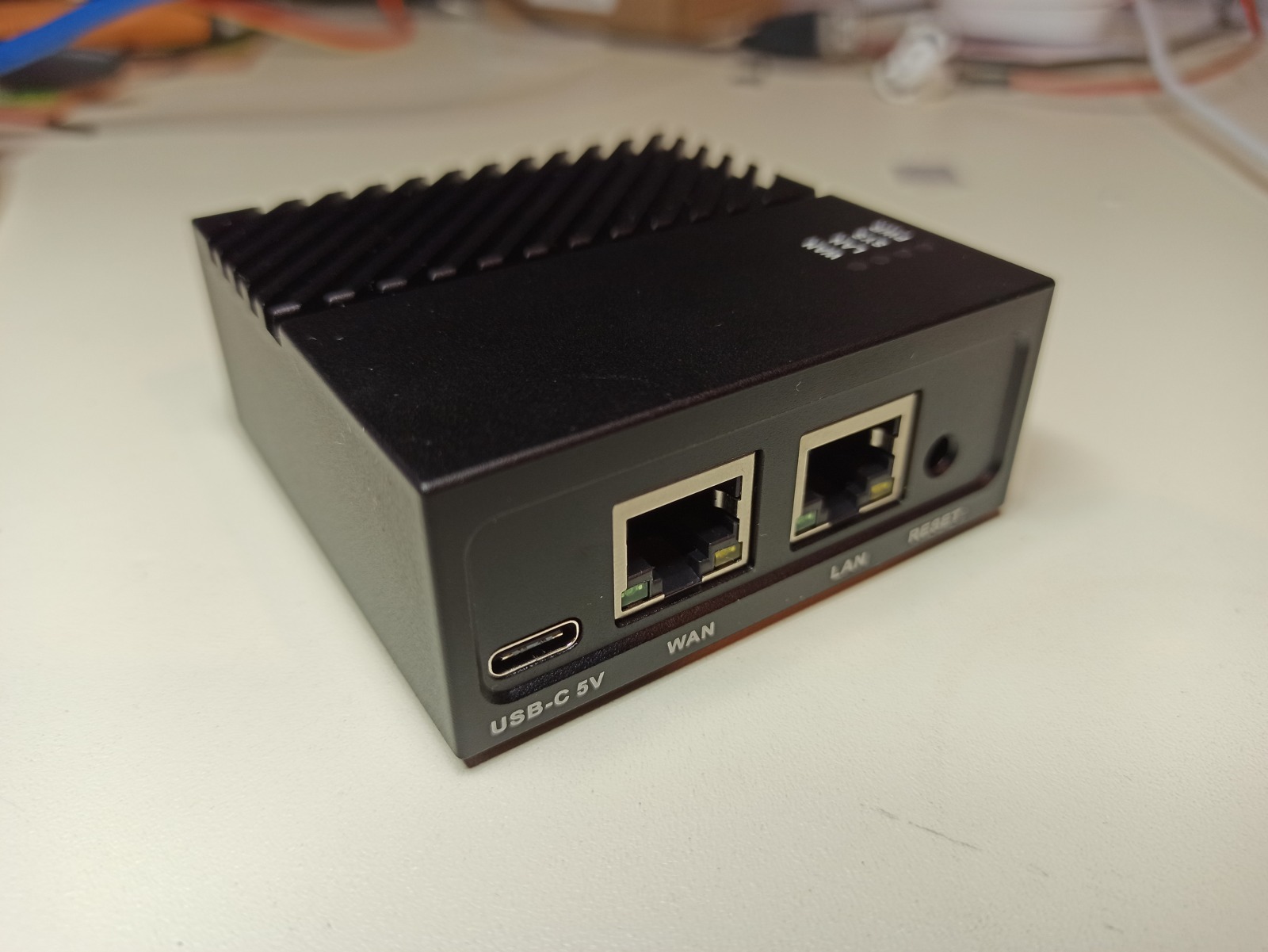 The Nanopi-R4S’s case is very compact and it’s only a bit bigger than its predecessor Nanopi-R2S, but also includes more horse power under the hood. You can see how those two compare in size. 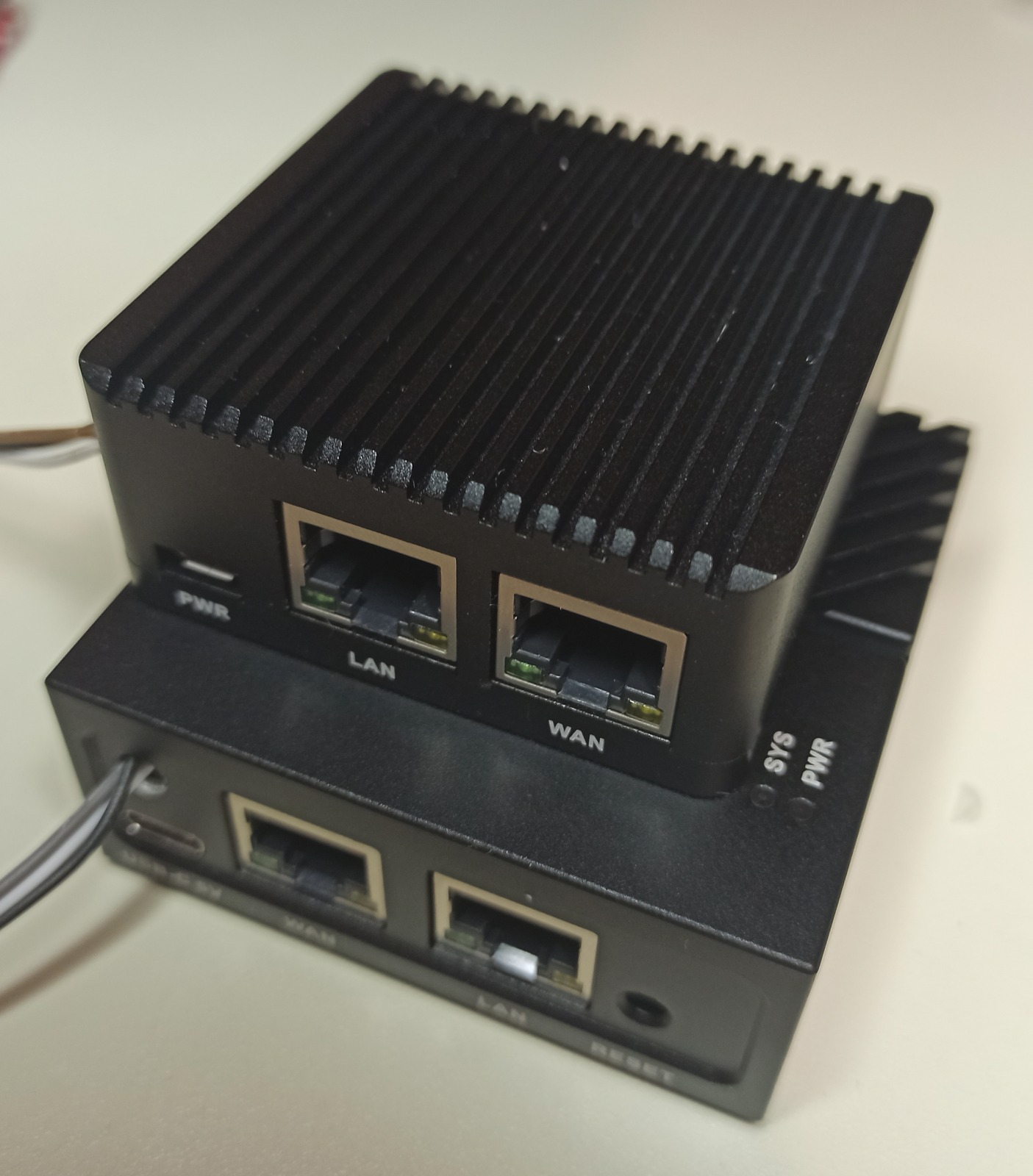 As you can see in the above image I’ve done a modification on the case by drilling a hole above the USB power connector. I’ve done this hole in order to be able to use the UART console while the case is closed.

The Nanopi-R2S also has the same issue, as you can’t connect the UART console while the case is closed. Therefore, I’ve done the same modification to both cases. This is very easy to do as aluminum is very easy and soft to drill.

Here’s an image of the Nanopi-R2S with the case open. 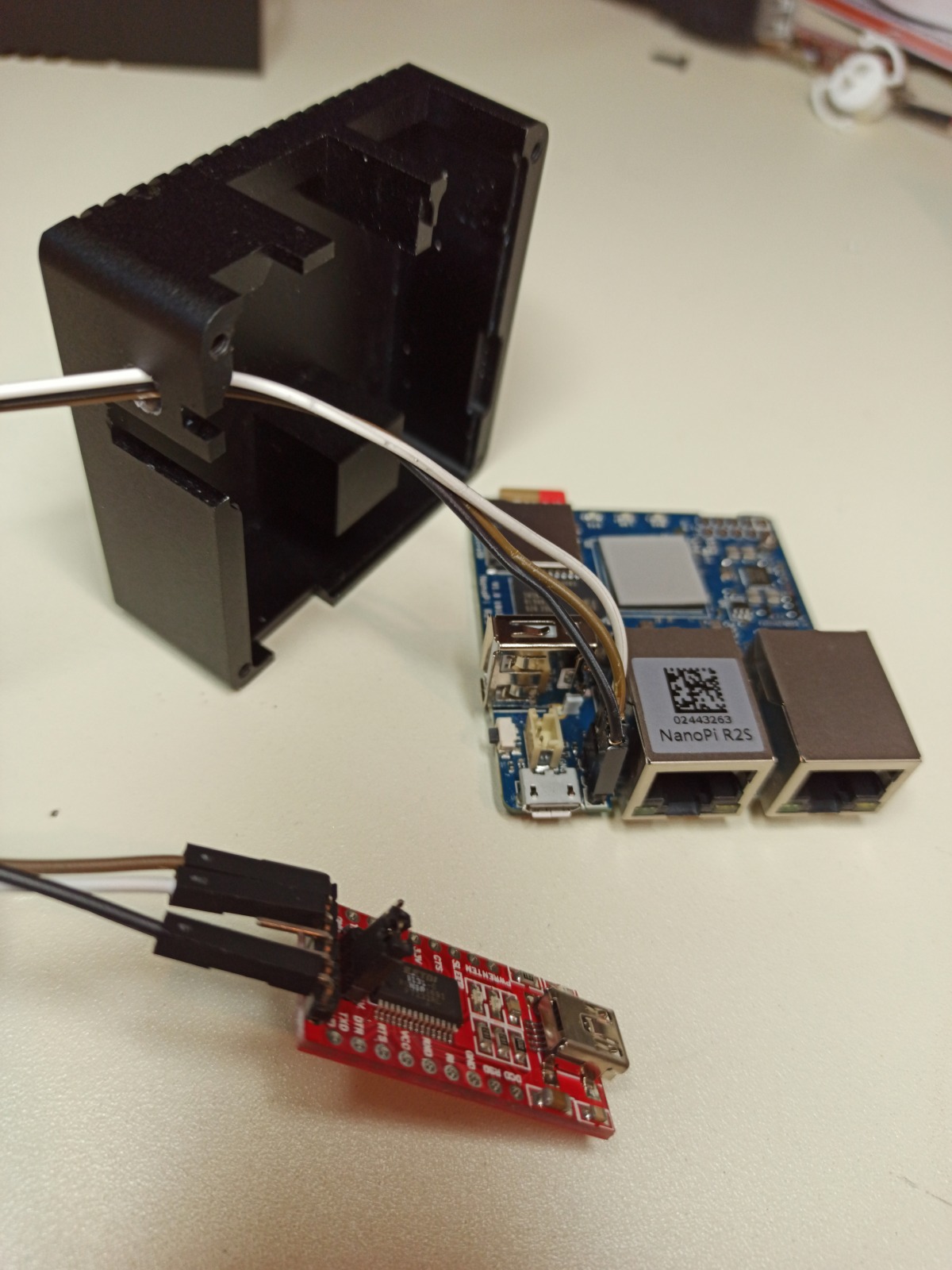 I also had to use a cutter to trim the top of the dupont connectors in order for the case to close properly.

Another thing I need to mention here is that I had to also change the thermal pad on the Nanopi-R2S because it comes with a 0.5mm pad and I’ve seen that the temperature was a bit high. When I’ve changed the pad with a 1mm thickness then it was much better. I guess you can use any thermal pad, but in my case I’ve used this one that I got from ebay. 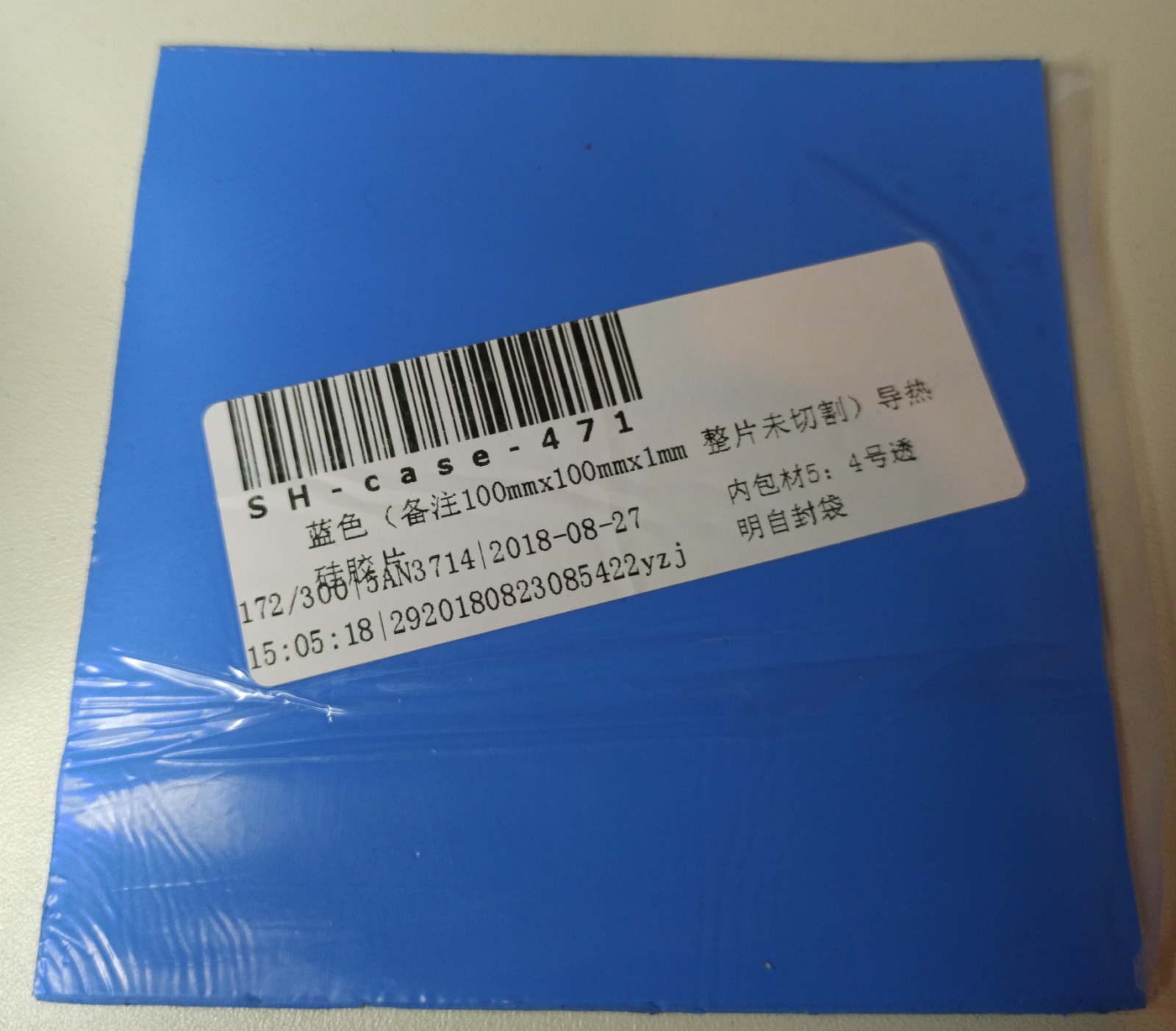 The thermal pad of the Nanopi-R4S seems to be fine so I haven’t changed that.

The setup I’ve used for the benchmarks is very simple and I’ve only used standard equipment that anyone can buy cheap. So, no expensive or smart Ethernet switches or expensive cables. I think that way the results will reflect the most common case scenarios, which is use the board in a home or small office environment.

The switch I’ve used is the TP-Link TL-SG108, which is an 8-port GbE switch and it costs approx. 20 EUR here in Germany, which I believe is cheap. The cables I’ve used are some ultra-cheap 1m CAT6 which I use for my tests.

I’ve done two kind of tests. The first test is to test only the WAN interface, using my workstation which has an onboard GbE interface. This is the setup.

As you can see from the above diagram the workstation is connected on the GbE switch as also the WAN interface of the Nanopi-RxS (I mean both R2S and R4S). Then the LAN interface, which by default is bridged internally in FriendlyWRT, is connected on my Laptop which is using a USB-to-GbE adaptor as it doesn’t have a LAN connector.

I’ve tested thoroughly this USB-to-GbE adapter in many cases and it’s perfectly capable of 1 Gbit. So, don’t worry about it, it won’t affect the results.

Someone could argue here that the switch should be placed after the LAN and not before WAN, because WAN is meant to be connected to your ADSL/VDSL router. Well, that’s one option, but also this option is a valid setup for many setups. For example I prefer to have the WiFi router before the WAN and some of my devices after the LAN, so the devices connected with before WAN don’t have access to the LAN devices via the bridge interface.

My workstation is a Ryzen 2700X and the Ethernet is an onboard interface on the ASRock Fatal1ty X470 Gaming K4 motherboard with the latest firmware at this date. The kernel and OS are the following:

This is the kernel and OS of the Nanopi-R4S

And this is the kernel ans OS of the Nanopi-R2S

With this setup, I’ve used iperf to benchmark the WAN interface and the bridged interface. The WAN interface is getting an IP from the DHCP router which is also connected on the GbE switch and the Nanopi-RxS runs it’s own DHCP server for the bridge interface which is the range of 192.168.2.0. Therefore, the laptop gets an IP address in the 192.168.2.x range but it does have access to all the IPs in the WAN. For that reason in the bridge tests the Laptop always acts as the client.

Before see the benchmark results this is the table of the IP addresses.

I’ll do 6 different tests, which are described in the following table.

2 mins, means that the test lasts for 2 minutes (or 120 secs), which is a pretty good average time as it means approx. 13GB of data in a GbE.

I’ve also tried several TCP window sizes, but usually the default size is the one that you should focus.

The first benchmark is to test the speed between the workstation and the Laptop on the GbE switch to verify the max speed this setup can achieve. These are the results:

In the tables I’ll be adding the commands that I’m using on each server/client and then I’ll add the result that iperf outputs.

So, in this case we can see that the setup maximizes at 941 Mbits/sec.

As you can see from the above benchmarks the Nanopi-R4S WAN interface is fully capable of GbE speed, which is really cool. I’ve also used the FriendlyWRT web interface to get some screenshots of the various Luci statistics using the default enabled collectd sensors. These are the results.

As you can see the CPU usage is ~35%, but most of the load is because of the docker daemon that is running in the background. Also note that the temperature is 60C without the heatsink and less than 40C with the heatsink. This happened because I’ve added the heatsink in the middle of the test, but that was eventually a good thing because I’ve seen the difference that it does.

As you can see the WAN interface reaches the max GbE speed of my setup, which is really great. 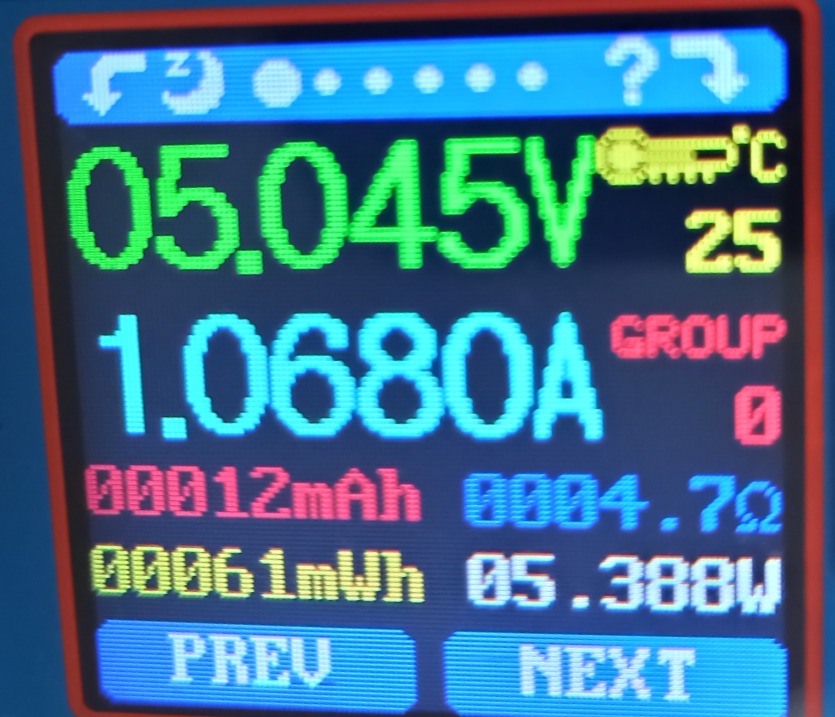 So, now lets test the bridge network interface, which is actually the most interesting benchmark for this device as it shows it’s capabilities in the real-case scenario.

As you can see from the above benchmarks the Nanopi-R4S can max the GbE speed of my setup in the bridged mode. You may see that the speed dropped when using custom TCP window sizes, which I guess it’s because of the mismatch window sizes internally in bridge, but I don’t give much attention to this as the default TCP size works fine.

These are some screenshots from the web interface and the sensors.

As you can see the CPU load is less than 30% and again most of the load is because of the docker daemon running in the background. Also the temperature doesn’t exceed the 38C, which means the heatsink works really well.

Again my personal opinion is that the Nanopi-R4S reaches the maximum performance of my network also in the bridge mode. Excellent.

This post would be incomplete without compare benchmarks between the Nanopi-R4S and Nanopi-R2S. Therefore, I’ve also executed the same benchmarks on the R2S in both WAN and bridge interface. These are the WAN results.

As you can see from the above benchmarks, although the TCP test with the default window size reaches the maximum performance, the performance drops in the TCP parallel test.

These are the sensor graphs from the web interface.

As you can see the processor usage is ~60% which the double compared to the Nanopi-R4S, but again the docker daemon uses ~30% of the CPU. Also the temperature seems to be higher than Nanopi-R4S, even with the better thermal I’ve used.

As you can see from the above benchmarks the Nanopi-R2S has trouble to reach the maximum performance of the network and this seems to be an issue with the internal USB-to-GbE of the board. Nevertheless, some of you may be satisfied with those results for your use case.

These are the sensors graphs from the web interface. 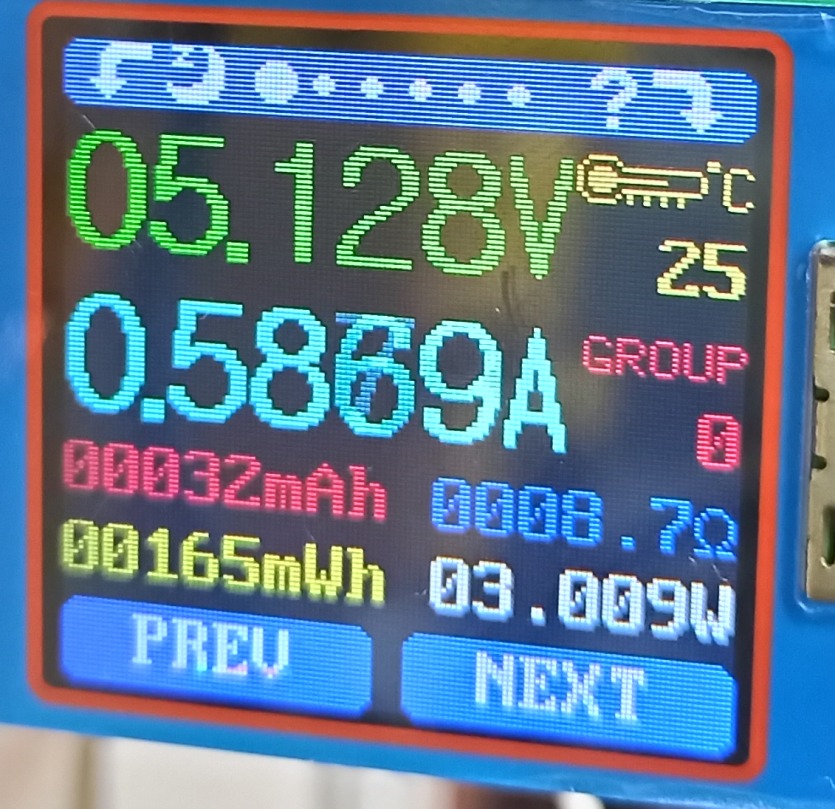 OK, some of you may want to choose between those two boards. Well, I won’t try to get into too many details in the specific things that are different between those two. Instead I’ll just add a table here with the tests results and also add a few notes after that.

From the above table you can see that the new Nanopi-R4S is faster than R2S especially when it comes to UDP data transfers. The R4S is reaching in most cases the maximum network capacity, but R2S can’t. Therefore, the R4S has better performance over the R2S.

As I’ve mentioned, I’ve received this board from FriendlyArm as a sample for evaluation purposes. My plan was to create a Yocto BSP layer for this, but since the Armbian support is not ready yet I’ve decided to do a benchmark and a comparison between the R4S and the R2S.

Personally, I like the performance of this board and I think it’s nice to use as a home router. Just have in mind that if you compare it with the R2S then the performance is better but also it consumes more power, as the RK3399 is a more power-hungry SoC than the RK3328.

Benchmarking the STM32MP1 IPC between the MCU and CPU (part 1)

Intro Update: The second part is here. Long time no see. Well, having two babies at home is really not recommended for personal stupid projects. Nevertheless, I’ve found some time to dive into th...

Intro In the last post, I’ve done a benchmark on the Nanopi-R2S and Nanopi-R4S. After a comment from tkaiser here, I’ve verified that all IRQs are mapped to CPU0, which means that the default Frie...

Hacking a Sonoff S20 and adding an ACS712 current sensor