Everyone the uses Docker knows already the benefits of being able to spin up a sandbox container that contains everything you need to perform a task, without having to install anything on your host or spend much time to resolve dependencies.

Sometimes though, users don’t really know the details of where those images are coming from. Because it’s just easy to pull an image and run a container, often devs not realize that those images where build by someone and their hosted in a specific server which is called registry. I guess most of the readers do know that, but sometimes even we need something more than that.

For example, I would prefer to host my own private images on my own server or I would like to be able to have access to images in my local network in case the internet is not available.

In this case, the solution is to host your own docker registry.

Since, this blog is more oriented to embedded and sometimes it’s not really clear how to do that on an aarch64 hardware, I’ve thought about writing this guide that you can use to host your own docker registry on any available SBC you have.

In this post I’m using the nanopi neo2 as my docker registry.

Nanopi neo2, is based on the Allwinner H5 SoC, which contains a quad-core Cortex-A53. The board also comes with 512MB of RAM, which might seem low but it’s more than enough for the purpose.

Instead of just building a self-host docker registry, it’s nice to also have a docker proxy. That means that you can use your registry to mirror images from the docker-hub. Therefore, if you’re running pipelines that pull images then instead of relying on a remote registry, you can just use your self-host registry as mirror.

Setting up the board

First step is to set up the board. I suggest that you use Armbian and find any SBC that is supported. This means that you get an updated kernel and a very well setup OS which comes with some nice features.

In my case I’ve downloaded the latest version from the https server, but you can also build your image from the source.

Then use the Balena etcher to flash the image on an SD card. Then boot and follow the steps to configure your OS for the first time (root password, new user, e.t.c.)

After it’s booted login and run:

In my case the uname is:

In order to be able to run docker in your SBC you need to execute the following steps.

First edit your armbianEnv.txt and enable the docker optimizations:

Then add this line:

After you’ve done with the previous steps install docker.io

The apparmor is needed from docker and it’s not installed by default.

You may need to update the version. Currently, the last version is v2.5.1

I’ve created this repo based on the docker-registry-ui and I’m using the ui-as-standalone example.

Copy your ssh keys to your SBC from your host

To simplify the process of ssh and scp files from your host to the SBC you can run this command:

Now you can ssh without using credentials.

Create credentials (on your host)

Now on your host x86_64 run this to create the htpasswd file.

you need to replace the <username> and <password> with the credentials you want.

Allow insecure registry on your host

By default docker doesn’t allow http registries for security reasons. Therefore, on your host you need to explicitly allow the unsecure registry. You can read more about that here.

On your host you can run this command:

Now verify that you see this:

On your host you need to create this file:

You need to replace the IP with your SBC’s IP.

Then restart the docker service:

And check again that the registry IP is now allowed:

Now on your SBC run this command inside ~/docker-registry-sbc

If everything is fine you should see something like this:

Now the service is running.

Currently the service is not running as a daemon. You need to create your own service unit to run this service as a daemon on reboot, which is not covered here.

Now on your host run this command:

Since the proxy is enabled you can use you registry to also mirror images like this:

The above command will pull the nginx image in your registry library and then pull it locally on your host.

For example, during this post I’ve used the xmartlabs/htpasswd to create the docker registry username:password, therefore, the image is already on my host. Therefore, in order to push the image to my private registry I need to execute the following commands.

Then you can see the image in the ui 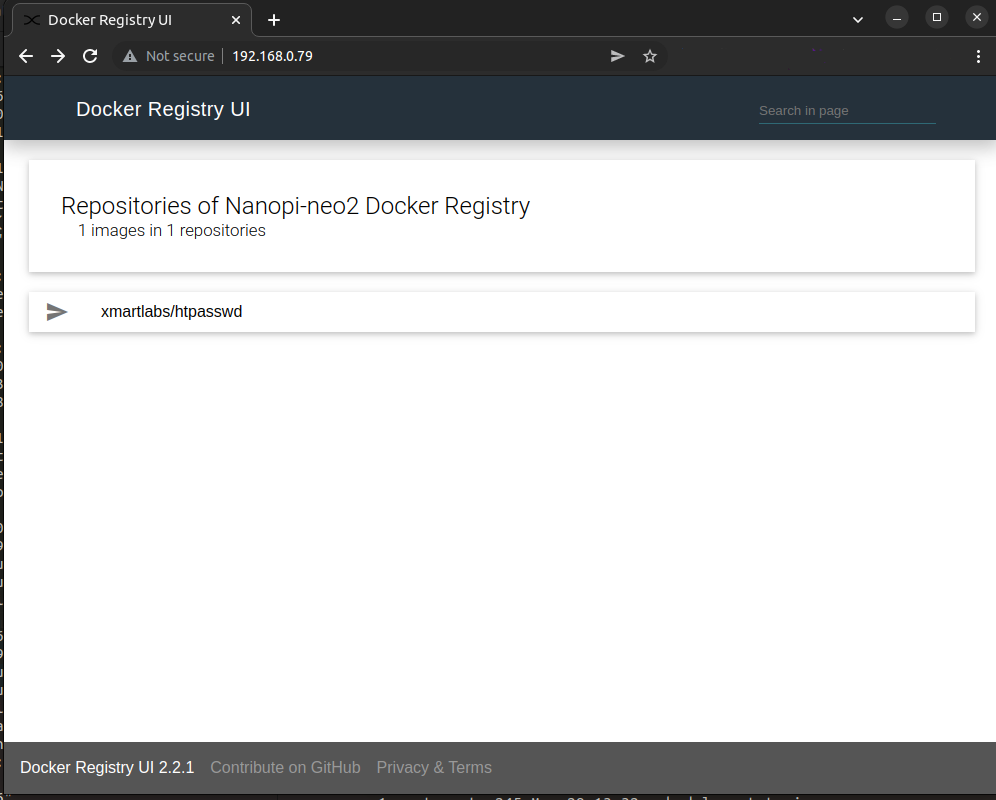 If everything worked as expected, then you should have your own docker registry hosted on your SBC. I’ve done some trivial tests on the nanopi-neo2 and it’s more than enough for my own purposes, even if it’s a low spec SBC. You could also install all the tools without using docker-compose, but I really can’t find any reason to go through the complexity of doing that, since docker works fine even on the nanopi-neo2.

So, if you want to run your own registry on any SBC then this guide takes you step-by-step through the process.

Intro Hello fellow Yocto engineers 🙂 I guess, you already know that this new Apple M1 SoC has shaken the IT world. Well, this is not another post for praising Apple for its new SoC. There was alr...